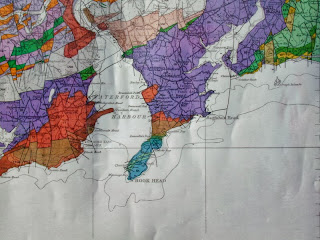 At first glance it is a big house like so many in the country, but Loftus Hall, located on Hook head in County Wexford has an eerie reputation and is said to be one of the most haunted places on the island. Local folklore has it that the hall was haunted both by the devil and by the ghost of a young woman.
The Redmond family built the original building about 1350 and lived there until the Cromwellian campaign, when their lands were confiscated and it was granted to the Loftus family in the 1650s. Charles Tottenham came to live in the mansion in the middle of the 18th century with his second wife and his daughter Anne.
The family like to play cards in the evening. One night during a storm, a ship unexpectedly arrived at Hook Peninsula. A young gentleman from the ship came to the house and was made welcome and he stayed a few nights. In other versions of the tale he arrived on horseback having lost his way.
Anne and the young man became very close and both had considerable success playing cards. One night as they played the young man dropped a card on the floor. Anne went to pick it up and as she did so she saw to her horror that the man had hooves for feet. She screamed in horror as the young man, realising the game was up vanished in a puff of smoke leaving a hole in the ceiling where he exited. It was said that the hole could be properly repaired. Of course the cloven foot could be explained by a clubfoot, which was much misunderstood at the time.
Though the mysterious stranger had departed his presence remained and poltergeist activity made his presence known. Protestant clergymen were called upon to exorcise the house, but failed. Though the penal Laws were in force the family sought the help of Father Thomas Broaders, who lived locally and he exorcised the house. When he died in 1773 his tomb in Horetown Cemetery was inscribed with the following epitaph:

Who did good and prayed for all.

And banished the Devil from Loftus Hall."

Anne never recovered from the shock of that night and lost her mind. She was put in her favourite room in the mansion, known as the Tapestry Room, where she would spend the rest of her days. She refused food and drink and sat with her knees under her chin until she died there in 1775 aged 31. It is said that when she died, they could not straighten her body as her muscles had seized and she was buried in the same sitting position in which she had died.
There may have been a more credible explanation however for her supposed mental illness and it was said that Anne had shared her bed with the young man and suddenly found herself in the ‘family way’. The young man was either no longer around when her pregnancy was discovered or her father disapproved of him. At the time such pregnancies would have been viewed as a disgrace and it would not have been unusual for her to have been locked away out of sight, never to be spoken of again.
Given that her life had been an unhappy one it is not surprising that her ghost remained on in her beloved Tapestry Room.
A number of encounters with Anne’s ghost are recorded. The father of the Rev. George Reade stayed with a large party at the Hall some time about 1790, and was given the Tapestry Chamber to sleep in. He described how something heavy leapt upon his bed, growling like a dog. The curtains were torn back and the clothes stripped from the bed. At first he assumed that someone was playing a trick, but searching the room he found no one and the door was locked. Several years later, when the 2nd Marquess of Ely was at the Hall, his valet, Shannon, was put in the Tapestry Chamber and woke the whole household by his screams in the night. He reported that the curtains of the bed had been violently torn back and he saw a tall lady dressed in stiff brocaded silk. He refused to spend another night in the room.
When the Rev. George Reade and his father came to stay George chose the Tapestry Chamber as his bedroom. As he stayed up late reading a magazine, he saw the door open and a tall lady in a stiff dress pass silently through the room to a closet in the comer, where she disappeared. He did not realise that he had just witnessed a ghostly apparition until it happened again the next night and he tried to grab her. His arm went right through her. The ghost does not appear to have terrorised him and although aware of the tale continued to sleep in that particular room whenever he found himself at the hall.
This was not the case with Rev. Charles Dale, tutor to the young marquess, who slept in the room in the latter half of the 19th century and though taciturn about what he had witnessed was left visibly shaken. By 1868 The Tapestry Chamber had become a billiards-room but spirits do not appreciate changes to their haunts and the servants reported that her ghost made considerable noise by knocking the billiard balls about. 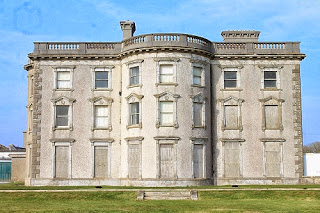 It was perhaps because of the continued hauntings that the hall was demolished in 1870 and rebuilt. The present structure dates from this time and was the residence of the 4th Marquess of Ely. In 1917 Loftus Hall was bought by the Sisters of Providence and turned into a convent and a school for young girls interested in joining the order and later by the Rossminians from 1937 until 1983. In 1983 reopened it as "Loftus Hall Hotel", which operated until 1990s. The site has been examined by a paranormal investigator who claimed to have felt a presence there. The site stands on 70 acres of land and includes five reception rooms and twenty-two bedrooms. It was sold again in 2008 to an unknown buyer.
Posted by An Múinteoir Fánach at 2:07 AM